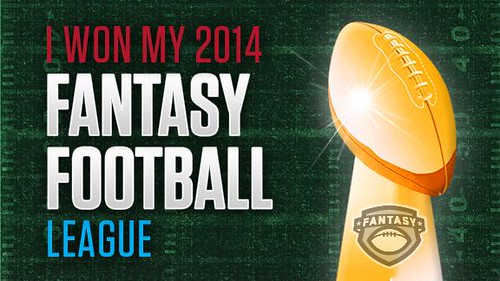 I won TWO of the four fantasy football leagues I was in this season! I'm the Champion of one league that was just for fun AND Champion of our league at work. Taking home the Deskey Frothy Head Football League Championship at work is going to bring in around $350! Not too shabby. At all. :D

Here's how my teams fared this season...
At work my team, Turn Down for Watt went 11-4 during the regular season, and made the playoffs as the second seed. They then proceeded to stomp their way through the playoffs. I ended up winning the semi-final by 23. And the championship game by 25, 123-98. But it was never really that close. At one point yesterday, I was up by 80+ points. Show me the money!

Team Skulls & Chicken Bones, in the league Genifer and I were in together, went 6-7 during the regular season. Somehow, I made it into the playoffs as the fourth seed (out of eight teams), knocked off the 10-3 number one seed in the first round, and then won the two-week championship, 202-145. Sadly, Genifer's Oscarbots went 5-8 and finished in eighth place. But she did hand me one of my seven regular season loses.

Team Capt Interception went 9-4 during the regular season, and went into the playoffs as the number one seed. I ended up losing in the first round of the playoffs by 6 points. SIX. The kicker is that I had Bengals RB Jeremy Hill on my bench, who posted a monster 26 point game. Had Hill been in my starting lineup, I would have had an easy 20 win. And, had I then played in the championship game, I would have beat the other team by like 60 points. So my Championship tally should have been three out of four. :/

And finally, Team Bunny Bears went 6-7 and finished in fifth place. But they did manage to win both of their games in the consolation ladder of the playoffs. :)

So much fun! I'm already looking forward to another fun fantasy season next year! 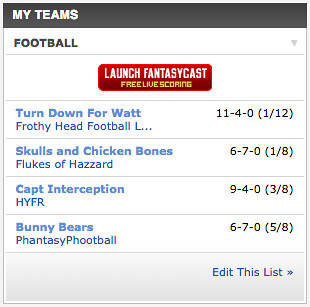